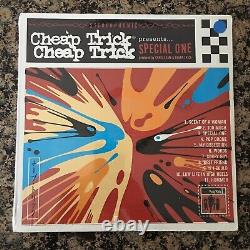 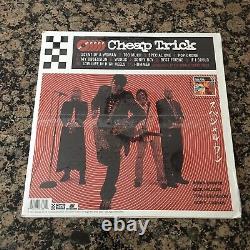 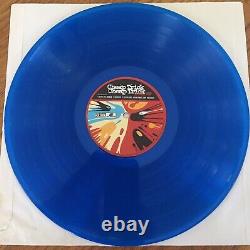 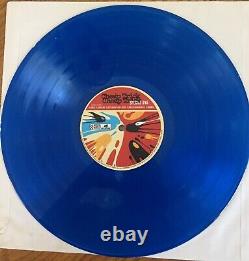 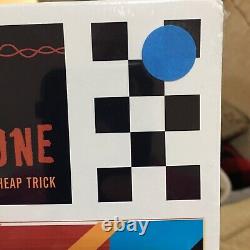 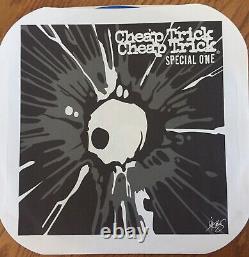 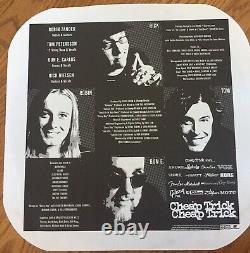 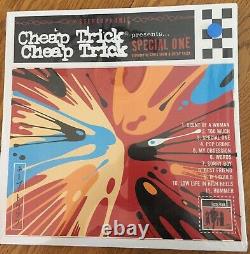 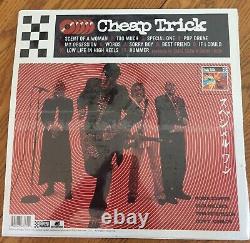 Cheap Trick Special One Blue Vinyl LP 2003 Limited Edition SEALED Extremely RARE. Condition is BRAND NEW AND SEALED. If you are a Cheap Trick fan and a vinyl enthusiast, this is the album for YOU! Special One is the fourteenth studio album by the band Cheap Trick.

It was released in 2003 and features the single Scent of a Woman. It charted for one week, reaching 128 on the album charts. This album brought 2015 Rock and Roll Hall of Fame inductees Cheap Trick back to form after their highly acclaimed album Cheap Trick album released in 1997. This vinyl album is extremely limited edition. Estimated production of 5,000 albums, 1000 each of five different vinyl colors (blue, green, red, yellow, white).

In 2001, Cheap Trick started writing songs which they eventually recorded in eight different studios for the 2003 release of Special One. Unlike most of their albums from the late 80s through the mid 90s, this album contained all self-penned material with minor contributions from outside writers. Robin Zander lead vocals, rhythm guitar. Rick Nielsen lead guitar, backing vocals.

"Low Life in High Heels" (Nielsen, Zander, Petersson) 2:49. "Hummer" (Nielsen, Zander, Petersson) 4:17. The following is a track by track rundown of CHEAP TRICKs 2003 album, Special One, featuring comments from the band members. Scent of a Woman - Robin Zander: This was one of the first songs that Rick brought to us for Special One. He had the title and most of the melody when he, Tom, and I got together in Florida with a couple of days off.

We settled down in a room with a little tape machine and a drum machine, and we started honing in on the lyric and the verse. Tom Petersson: This may sound silly, but to me, if AC/DC ever did a love song, this is how it would sound. It's a love song to women in general, which is usually the opposite of what you get from a hard rock band. It's like,'What are they saying? Women are the stronger sex? Wow, women don't need us! We don't know what the hell we're doing!

Too Much - Robin: This is a really different kind of song for us. It started out as a nod toward the Gasoline Alley era, but it also reminds me of Flowers from the Stones. Tom: Maybe it's more from around the Satanic Majesties period, but I definitely love those Stones ballads and mid-tempo songs.

This song is very much in that period. I don't even know if it sounds like us. It's a'Moonlite Mile'/'Memory Motel' kind of thing. Special One - Tom: Robin had been kicking this one around for a long time.

When I first heard his basic idea, it was like an early ELO song, or from the late Move, like'Message from the Country. I thought,'God, we've got to get this song together! That's where I got the title, although we used to call it'Doctor K,' for'Kevorkian.

There was a story about somebody losing their loved one in that way; I had this image in my head of a Filipino or Asian girl, walking along the beach. The direct inspiration, though, was a short story I had written, called'Sand Castles. Pop Drone - Robin: Tom brought this one to the fold. He did an instrumental track, and while we were in Rockford we all went into the studio to listen to it. It was so heavy; in fact, we thought the demo was a little too slow. So we sped it up, put some guitars on it, and boy, suddenly it was this huge monster. We decided to make the lyric as simple yet as strong as possible; Led Zeppelin had a way of doing that. And what we got was this massive song that is going to be really heavy onstage, like'Heaven Tonight. Tom: Originally I had this D drone, like an Indian tamboura, going through this whole song that was about half an hour long. But when I played it for Rick and Robin, they jumped right on it and turned it into a four-minute song. My Obsession - Tom: This was a straight-out pop song. It sounds a bit like Wilco to me, although it's got a Who kind of bridge. Robin: Tom brought the core of the song to us, and we all worked on it. He had a couple of different styles on the choruses, but we turned it into kind of the'Revolver' of Special One. It's kind of psychedelic, and it's about a good kind of obsessive love. Words - Robin: Rick had written these two completely different things, but they turned out to be in the same tempo. I thought we could pretty much put them together without changing anything. Rick had the title, so I took the music home, pieced it together, wrote the lyrics for the verses, and brought it back. Then Rick finished the lyrics for the bridge. And all of a sudden, we had this great, great song. Actually, we were surprised at how good it turned out.

My Obsession (Continued) - Tom: This sounds like Cheap Trick mainly because of Robin. We've done ballads and heavy songs about suicide and every other kind of thing. We've changed direction any number of times, but as long as Robin is singing, it's going to sound like us. Sorry, Boy - Tom: I was thinking about this as we were watching the war in Iraq on TV.

Here's what you get for fuking people around! Man, this song came out great! Robin: That song was probably written in five seconds.

I wanted to do something very dark, so I just went to the studio, turned my amp up all the way and let it feed back, and came up with this riff that permeates the entire song. It had'death' written all over it, so I decided to write about it in a social setting, like Columbine, death in public, or mass murder.

I wanted to talk about it at a very basic level, like,'How could this happen? How to teenage kids blow people away? The lyrics reflect these questions.

Best Friend - Robin: This started out as a riff on Rick's computer; it was one of the last things he wrote for the album. The demo had the same chord structure that we used on the song, and the lyrics for the first part were pretty much done. It was just a matter of Cheap Trick playing it to put our stamp on it, which we did by adding this big crescendo ending, with lots of layered vocals and stuff going on in the background. It's hard to say what Rick was talking about in his lyrics, but it's not unusual for him to think that way. In fact, he does it better than anybody I can think of. Tom: It reminds me of the Bonzo Dog Doo Dah Band. They did this song'Introduction,' where they kept adding guys:'Here's Eric Clapton on ukulele!

It built up more and more, until you had this huge orchestra. As far as the words, I think'Best Friend' is a love song about things you shouldn't be in love with -- the bad things in your life. If I Could - Tom: I love all the different moods to this song. It's got that lightweight pop thing, but there's a dark side too; it's not what it appears to be.

It starts out like "Shaft, " then it's like Donovan and the Jeff Beck Group on'Barabajagal' -- all these weird influences in one song. We get totally surprised so many times by how our songs come out.

It's almost like we had nothing to do with it, like,'Wow, I wish I'd written that. Wait a minute I did! Holy shit, that's actually good!

Robin: Rick wrote most of the lyric to this song. When I sing'If I Could,' I treat as if it's someone talking to himself in a mirror. It's almost a self-destructive theme. Low Life In High Heels/Hummer - Tom: Rick had come in with this humming idea, and it just struck Robin and me.

It was in a collection of stuff that he had, and we were like,'Hey, what's that?'Oh, I don't know. It's just some idea I had. Rick is the worst with that: He'll say,'That's just some dumb idea,' and it's really great. So Robin and I started playing it on guitars, and that Billy Gibbons thing fell into it.

We put together a verse and a chorus and turned it from a weird groove into an actual song. Robin: It started out as just humming. Then we started picking it apart. It went through about ten transitions to get to where it is today.

That song has a great feeling. I picture it as the first one or the last one of the night at our shows. The item "Cheap Trick Special One Blue Vinyl LP 2003 Limited Edition SEALED Extremely RARE" is in sale since Thursday, April 29, 2021.